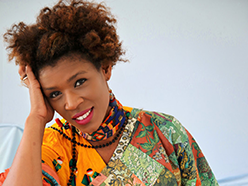 After the acclaimed jazz album Epistola, Carmen Souza, with the help of her longtime musical partner Theo Pascal, returns to her creole roots to present a new album called Creology. With her gravity-defying voice she guides us in the musical journey of her ancestors on a unique transatlantic route through the sounds of the Creole Nation.

Discover rhythms like Batuque, Funana, Semba, Quilapanga, Marrabenta from Cabo Verde, Angola, Mozambique together with Afro-Brazilian and Cuban sounds, travelling all the way to the jazz shores of New Orleans and experience a unique live atmosphere! 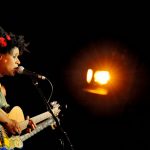 Carmen Souza was born in Lisbon within a Christian family of Cape Verdeans. Very early she experienced the sodade feeling of missing someone with the long absence of her father due to his work at sea. She grew up in a mixed language environment of Creole, the Cape Verde dialect her parents spoke at home, and Portuguese, always surrounded by the Cape Verdean way of life. Theo Pascal, her producer and mentor and one of the best bass players in Portugal, discovered her talent and introduced Carmen to Jazz and other contemporary sounds that markedly influenced her musical development. Musicians like Theo Pascal, Horace Silver, Ella Fitzgerald, Billie Holiday, Nina Simone, Joe Zawinul, Herbie Hancock, Keith Jarret, Bill Evans, Miles Davis, etc, truly inspire her evolution and search for a unique personal style.