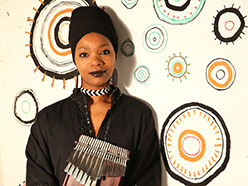 Raised to the sound of her grandmother’s song and drum, Zimbabwean vocalist and mbira virtuoso Anna Mudeka was quick to adopt the mbira dzavadzimu, an ancient thumb piano variously known as a likembe, kalimba or in Mozambique, nyunga nyunga.

Over a thousand years old, the mbira represents an essentialelement of sub-Saharan identity. With an utterly unique soundthat pierces the soul with clarity and beauty, it evokes the spirituality of her ancestry with sacred and celebratory rhythmsalike.

Anna brings an inspirational feast of southern African culture toaudiences across the UK in autumn this year. She offers anaccessible family-friendly afternoon workshop followed by an informal evening solo acoustic performance. Workshop participants will learn instrumentation of the mbira, traditional rhythms and melodies through shakers and drums, clapping and song.

Anna’s performance offers a complete immersion into the musical evolution of the region, seamlessly weaving story with song. Anna’s powerful vocals and instrumental artistry bring alive the rich musical tradition of Zimbabwe in a show that is soothing, uplifting and vibrant in equal measures. 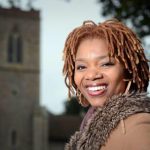 Singer, dancer, songwriter, multi-instrumentalist Anna Mudeka is an influential ambassador for women and their role in the proud heritage of her homeland, teacher and champion of women in business who has worked with institutions, corporations and celebrities across the globe. Steeped in the traditions and culture of her homeland, Zimbabwe, she is the recipient of Africa’s most influential ‘Woman in Business and Government Award, 2014’, and a consultant for organisations as diverse as the Ministry of Defence and Standard Bank. Organiser and founder of the Southburgh Festival of World Music in Norfolk, she has also performed at WOMAD, WOMEX, Roundhouse, Latitude Festival and for Cure International at Kensington Palace. She is a passionate charity activist, raising funds for the Mudeka Foundation which supports orphans in Zimbabwe through education and against poverty. Her debut album Dendende is available on Totena Music, showcasing her vibrant fusion of Afrorock and Afrofunk with The Anna Mudeka Band.