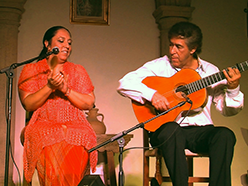 Juan Martín and Amparo Heredia ‘La Repompilla’ started their collaboration with a concert in the Spanish city of Ronda six years ago and followed up to great acclaim with a recital in flamenco’s epicentre, Morón de la Frontera, Seville, in the Teatro Oriente. They have since toured in the UK, Belgium and Canada in Juan Martín’s dance company.

About Juan Martín
Juan Martín will open the evening with his soulful Tarantas ‘Bordon Minero’, the song of the miners from Cartagena and Almeria whose chords and discordant sounds are amongst the most evocative in the whole of the flamenco guitar repertoire. He will also perform ‘La Chispa’ (The Spark), an Alegrias from the sparkling seaport of Cádiz which reflects the wit and grace of its people, the Gaditanos.

About Amparo Heredia
Amparo Heredia will sing her prize-winning Seguiriyas full of intense tragedy and the Tangos Morunos (Moorish influenced Tangos Flamencos) as well as her tour de force Granainas with its superb lyrical inflexions. Her Bulerias reflect her rhythmic gypsy genius inherited from her aunt ‘La Repompa de Málaga’ who even though she died in her twenties, became an enduring legend in the annals of flamenco as a singer and dancer; let’s hope the ‘duendes’ (divine inspirations) visit Amparo and that she dances a little ‘Por Fiesta’!