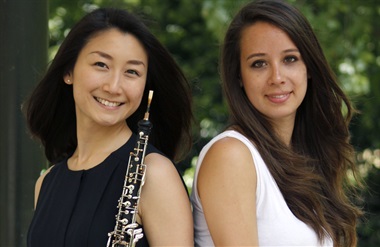 To celebrate the bicentenary of Charlotte Brontë’s birth, Shion Duo are joined by actress Rebecca Kenny for this special concert.  Shion Duo have re-imagened Jane Eyre through music and words written by and for women from around the world.

The programme will include new commissions by students of the Royal Northern College of Music, and music by Fanny Mendelssohn-Hensel, Marina Dranishnikova and Clara Schumann.e.

Jane Eyre was Charlotte Brontë’s first novel and was published in 1847, it is the story of Jane Eyre’s  emotions and experiences including her growth to adulthood and her love for Mr. Rochester.

“I am no bird; no net ensnares me; I am a free human being with an independent will.”

Japanese oboist, Mana Shibata and London-based pianist, Suling King formed Shion Duo in 2015 with the aim to give the abundance of stunning repertoire for oboe and piano duo the attention that it deserves. Most notably Shion Duo has worked closely with composer Paul Patterson on his Phoenix Sonata, as well as promoting works by British composers in general.

Mana enjoys a varied career as a freelance oboist in the UK in orchestras and as a chamber musician. She has worked with orchestras such as Manchester Camerata, City of London Sinfonia and Orchestras of Scottish Opera and the Royal Opera House. At 2014 Barbirolli International Oboe Competition, she was awarded a special prize for her performance of the oboe sonata by the British composer, York Bowen. Contemporary music is a significant part in Mana’s life. In 2012 she was one of 7 performers in the Opera Group’s award-winning revival of Bow Down by Harrison Birtwistle, a music-theatre piece in which every performer uses song, instrumental music, spoken words and physical movement to tell the old folk tale, Two Sisters.

Suling King was a student at the Purcell School of Music from 2002-2004, and continued her studies at the Royal Academy of Music. She also gained a Bachelor of Music from King’s College London, specialising in piano performance. Suling regularly accompanies musicians at the London Colleges and the European Union Youth Orchestra.