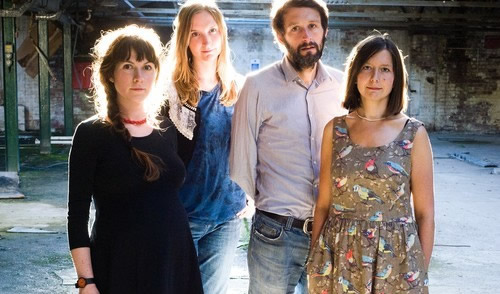 The Furrow Collective were described by The Guardian as ” a bleakly charming and intriguing curiosity”.

The four members of this much loved folk band, also write and perform individually and with other bands and are well-known on the British folk scene.  This variety means that their songs as part of The Furrow Collective are a mixture of a range of different musical styles.

Alasdair Roberts, Emily Portman, Lucy Farrell and Rachel Newton are four fine soloists sharing a mutual love of traditional songs, from both sides of the English and Scottish borders, with playful, boundary-defying musicianship. Since their critically acclaimed debut At Our Next Meeting, The Furrow Collective has been in demand as a touring band, gigging throughout Europe and performing BBC live sessions.Hot on the heels of two BBC Folk Award nominations, they have released an outstanding five track EP Blow out the Moon last autumn, coinciding with touring, offering a tempting taster of their next album.

Each band member leads a song, moving with ease from jaunty stories of ailing horses, to poignant laments and sparsely adorned supernatural ballads. Blow Out the Moon culminates with the beautiful title track, a lullaby in spine-tingling four-part harmony. Strikingly unaffected vocals are accompanied by harp, guitar, viola, concertina, piano, banjo, fiddles and musical saw. Blow Out the Moon reflects the breadth of Furrow Collective’s diversity whilst showing a crystallisation of their unique sound. It gives a taste of great things to come with the release of their single ‘Wild Hog in the Woods’ out in March and the second full length album arriving later on in 2016.

About The Furrow Collective

Emily Portman
Emily Portman is a singer, writer and concertina player originating from Glastonbury and hailed ‘one of the new British folk scene’s most beguiling presences’ (Uncut).  Emily is the 2013 holder of the BBC Radio Two Folk Award for Best Original Song; an accolade which reflects her power to lure listeners into a complex and darkly surreal netherworld, conjuring a dark and brooding realm. Her ethereal voice and her trio’s enchanting harmonies belie a world of dark storytelling, cruel deeds and sordid city landscapes, part inspired by traditional balladry and part by a rich literary sources, from the myth of Leda and the Swan to the magical realism of Angela Carter.

Alasdair Roberts
Alasdair Roberts is a musician based in Glasgow.  He is primarily a singer, acoustic finger-style guitarist, writer/composer of new songs and interpreter of traditional songs and ballads.  He has a long-standing relationship with Drag City Records, which has released several albums of his work since 1997.  In addition to his collaboration with Emily, Rachel and Lucy in The Furrow Collective, he often performs and records both solo and as part of the musical group known as Alasdair Roberts & Friends. More information about Alasdair and his activities can be found on his personal website, here.

Lucy Farrell
Lucy Farrell began lulling the folk scene with her rich and honeyed voice when she left her Kent home to study the Folk and Traditional Music course in Newcastle in 2004. Since then, her exploration of traditional and contemporary song has touched the hearts of audiences well beyond the folk world, her beguiling and crystal clear singing style crafting stories with spellbinding skill. Her talent for songwriting is also gaining recognition; her melancholic and heartbreaking To The Boy, which she recorded with duo partner Jonny Kearney on The North Farm Sessions EP, featured in Ian Fitzgibbon’s 2011 film Death of a Superhero. With Kearney, Farrell has been nominated for two BBC Radio 2 Folk Awards. A versatile musician on fiddle, viola, and musical saw, Farrell is in popular demand as a session player, and can be seen and heard performing regularly in The Emily Portman Trio.

Rachel Newton
Rachel Newton, singer, harpist and fiddle player with The Shee and The Emily Portman Trio, is a highly sought-after musician, known for her prowess on the acoustic and the electric harp and her singing in both Gaelic and English. Nominated for ‘Album of the Year’ in Scots Trad Music Awards, Newton’s debut ‘The Shadow Side’ showcases Rachel’s own compositions alongside an original selection of ballads and contemporary songs and her bold follow up ‘Changeling’ was described as ‘the sound of modern Scotland’ by The Herald. Rachel performs with her own trio featuring Lauren MacColl on fiddle and Mattie Foulds on percussion and collaborates on various projects, including Norwegian group Boreas and The Elizabethan Session.