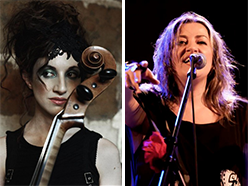 Led by Rowland Sutherland and Jackie Walduck, Ethereal World is both a music club night and an ensemble that features brilliant soloists known for their commanding performances in cross-cultural jazz, free improvisation, experimental and contemporary classical music.

Jackie is a composer and vibraphone player, whose work explores the exchanges between written and improvised music and the musicians that create it.  ​She works with classical, contemporary and jazz musicians from beginner to professional, and collaborates with dancers, artistis  and film-makers in a range of contexts to create new work.

In 2008 she formed Ignite with Wigmore Hall Learning a new type of chamber ensemble, working through improvisation.
About Rowland Sutherland

Flautist Rowland Sutherland enjoys an international career in many different fields of music. He regularly performs in new music and classical ensembles, jazz groups, symphony orchestras, various non-Western groups, pop outfits and as a soloist. Many of Rowland’s solo contemporary flute performances have been broadcast on BBC Radio 3, London. He has composed and arranged music for groups, ensembles and for the BBC.

Composition commissions include those written for the percussion quartet “Ensemble Bash” and the contemporary music group “New Music Players”. In 2003 The New Music Players released a special recording of commissions by British composers called Crying Bird, Echoing Star on the London Independent Records label which includes Rowland’s composition Timeless Odyssey.
Rowland was commissioned by the worldly, contemporary classical ensemble “Lontano” for his work Espiritu Libre, which received its first performance at La Linea, the London Festival of Latin Music 2005 at the South Bank Centre. They also performed Rowland’s new version for gospel choir and ensemble of his work The Mystical Land, during the ensembles 30th Anniversary concert series 2006.
Rowland’s piano trio One for Hermeto was given its world premiere by the Fidelio Trio for whom it was written for. The event took place during the BMIC’s The Cutting Edge 2005 series at The Warehouse, in London.