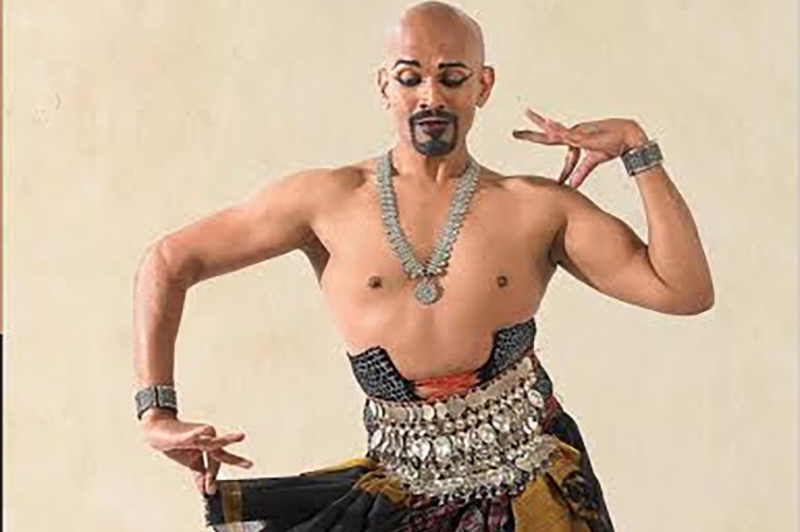 Learn some authentic Bollywood dance moves from dancers Ash and Kali (from Bombay Dreams and Kirov Ballet) part of the music and dance company ShivaNova.

Indian drumming – A taster on Indian drums learning some of the rhythm circles and interesting Indian folk and classical drum patterns.

Ash and Kali from ShivaNova perform a mix of Indian dance, Bollywood and Latin to a range of music from contemporary to traditional Indian. Ash and Kali are two of the most skilled and virtuoso dancers in the UK. Also featured will be Indian drumming in a spectacular ‘question-answer’ session with dancers.

Ash – A Time Out London’s Rising Talent and Critics’ Circle National Dance Awards UK nominee, Ash has been hailed as the Best Indian dancer in Great Britain today by Dance Europe.
In a recent survey conducted by Wiki Answers on the top twenty best male dancers in the world, Ash is the only representative of temple dance and appears along side his childhood idols, Rudolph Nureyev and Fred Astaire.
Tipped as one of the most unique and cutting edge choreographers emerging from the UK dance scene today, Ash was hand picked by the production team behind This Is It! to create a short temple dance solo and represent India Michael Jackson’s O2 shows.
A versatile dance maker with an intuitive grasp on popular culture, Ash brings a fresh new take on artistic collaboration, most notably in his recent work with the acclaimed director Kevin Godley, in creating the striking imagery behind the music video of the Katie Melua/William Orbit hit single, The Flood and his choreographic piece for the one of the hottest international dance shows on television So You Think You Can Dance 2 UK on BBC1 television.
“Mukherjee’s solos are works of art. There is no greater Indian dancer in Great Britain.
The speed with which he moves across the floor and the fluency of his poetic arms are for anyone who wishes to appreciate outstanding dancing.” – Mike Dixon, Dance Europe

Kali – a powerful dancer, his lyrical and flexible upper body, drawing on both Odissi and western contemporary demonstrated an affinity with the varied qualities of the jazz clarinet, while his lower body strength aligned with the rhythmic pulse”, Pulse (autumn 2004)
“Lasya was powerful and different giving the audience a lot of drama and incident”, Head of Dance, Royal Festival Hall.
“As inventive with his title as he is with his choreography. ‘Trandisionale’ speaks of transcending traditions and nationality, this work was outstanding. Kali, in his ‘creative dance avatar’, was able to display the dignity of evolved forms in a striking setting. The grace of Bharata Natyam and Odissi blended effortlessly, via Shankaresque fusion, into more sexually charged styles of Flamenco, Tango and informal social dance”, Narthaki.com